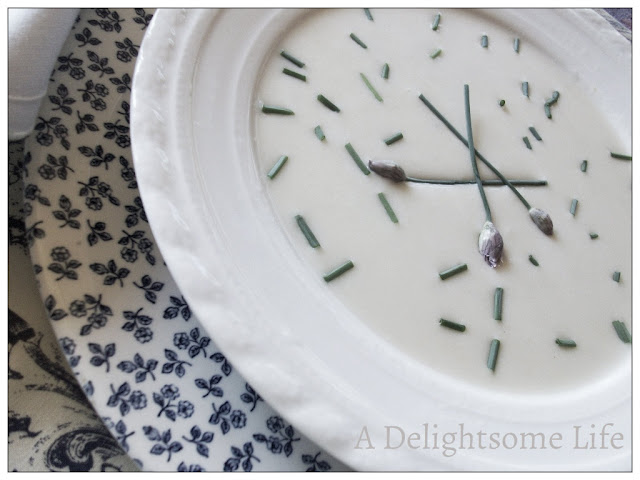 Summertime is here and I begin cooking dinner after everyone has left for the day.
In our old house, the kitchen can easily become the hottest room. I can fully
understand before the advent of air conditioning how, many years ago, the
kitchen was completely separate from the main house.
Vichyssoise is a fabulous, satisfying dish that can be enjoyed warm or chilled.
Easy to prepare, you can easily do this a day ahead giving the soup a good
chance to chill.
Julia Child’s version is as she put it, ‘an American invention on the leek
and potato soup‘. 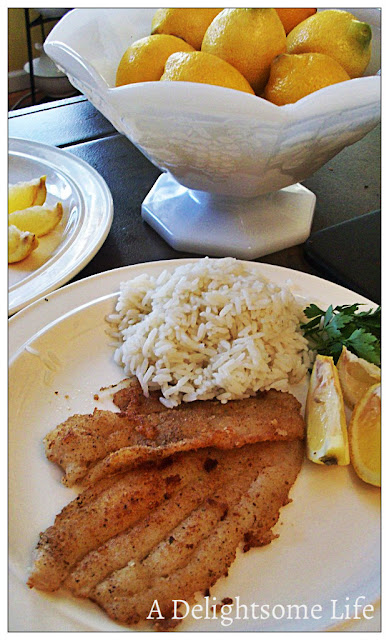 Fillet Meuniere, the dish that started it all. This is the first French dish that
Julia Child enjoyed in France. Thus began her lifelong passion for
good food. 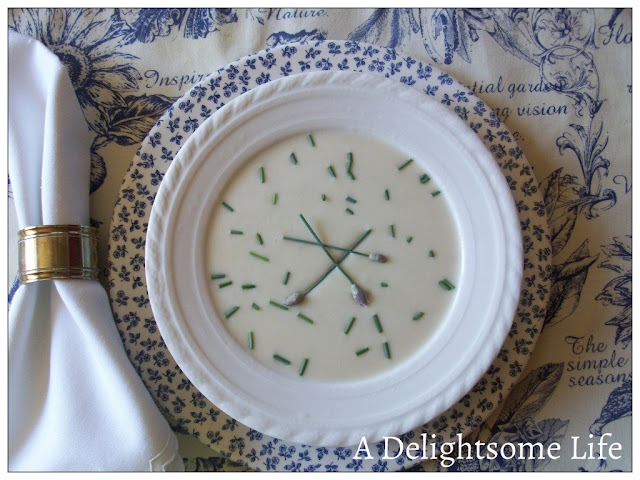 for 6 to 8 people
3 cups peeled, sliced potatoes
3 cups sliced white of leek
1 1/2 quarts of white stock,
chicken stock, or canned chicken
broth
1/2 to 1 cup whipping cream
salt and pepper
chilled soup cups
2 to 3 Tb minced chives
1.  Simmer the vegetables in stock or
broth instead of water. Puree the soup
either in the electric blender, or
through a food mill (I used a stick
blender).
Stir in the cream, season to taste.
Oversalting very slightly as salt loses
savor in a cold dish. Chill.
Serve in chilled soup cups and decorate
with minced chives. 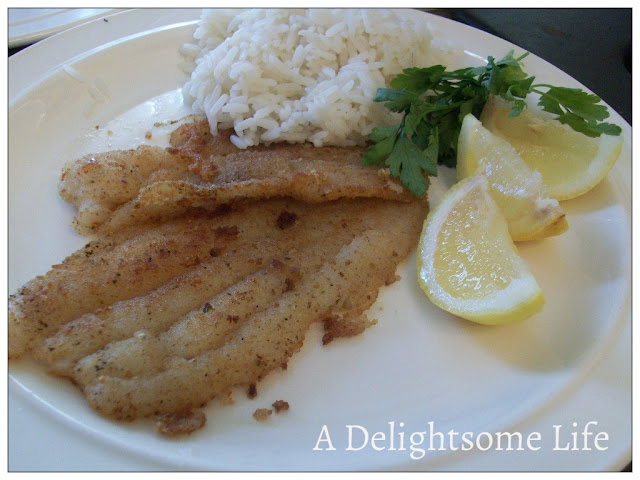 ‘A Fresh fillet of sole, flounder or red
snapper quickly sauteed in the best butter
served with a sprinkling of lemon juice
and parsley – it’s quick, easy and fish
at its simple best. Of course you can
elaborate, and add bread crumbs for a
crisp crust exterior – crumbs help
a lot when you’ve a fish of no particular
distinction. Pan frying is certainly the
most direct way of cooking fish, and not
only fillets but small fish, too, as well
as shrimp, scallops, and lobster, each
in its own special way‘ Julia Child
The Way To Cook
The fillets are scored on the skin side,
seasoned with salt and pepper, and just
before sauteing they are lightly floured;
then you pop them into a frying pay of
sizzling butter–a minute or two on each
side is all the cooking they need.
Tips:
Dredging in flour: a light coating of flour
gently crisps the outside of the fish while
helping it keep its shape as it browns in
the pan. To dredge, spread 1/2 cup or more
of flour in a plate. The moment before
sauteing drop in a seasoned fillet to coat
on each side with flour, shake off excess
flour, leaving just a dusting. Do only the
number of fillets you are about to saute. If
you dredge more than a minute or so in
advance, the flour gets wet, lumpy and gummy
a doleful mess you certainly don’t want on
your fresh fish.
Clarified butter:  Clarified butter is by far
the most satisfactory saute medium to my
mind; it browns well, smells wonderful as it
cooks, and gives food that unbeatable taste
of butter. Sauteing is obviously not for
dieters–
The simple system is to melt the butter
and pour the clear yellow liquid off the
residue.
The more professional system is to cut the
butter into small pieces for quick melting.
Bring it to the slow boil in a fairly
roomy saucepan, listening and watching for
several minutes until its crackling and
bubbling almost cease, indicating the milky
liquid has evaporated and the clarification
is complete. At this point watch that the
butter does not burn and darken.
Pour the clear yellow butter through a tea
strainer into a preserving jar. It will turn
a yellowish white when cold and congealed,
and will keep for months in the refrigerator
or freezer.
You can follow along and discover more interesting quotes
and information shared on Julia Child on
Facebook
Tumblr
Pinterest
and
Twitter
You can also purchase and download an E-Book version
of  Julia Child’s cookbook!
I will be sharing this post with these Delightsome blog parties:

Excerpted from Mastering the Art of French Cooking by Julia Child. Copyright © 1961 by Alfred A. Knopf. Reprinted with permission from the publisher Alfred A. Knopf, a division of Random House, Inc.